"You, Make me Sick!" ― Emi Kizaki-Linebarrels of Iron

Another linebarrel factor. A member of the JUDA special force, she is a linebarrel Factor earlier than Kouichi, and is protected by JUDA after appearing with the linebarrel 3 years before the story starts. In order to monitor Kouichi later, she is transferred to Kouichi's Junior High School, and is a classmate, and passed by"special recommendation"by JUDA's power. Initially, she was confused by Kouichi's absurd actions, but she trusted him, who gradually grew up after Yajima's death, and became a leader.It is said that she is the only one who has the power to change the world, and that Kouichi was in a position to take a step against because of his guilt, but Kouichi listened to his conviction and showed his understanding, becoming JUDA's greatest understanding person. However, there is a depiction of yoshiai, who talks with Koichi close, that causes an outrage that even domyoji is silent (when she discovers that Kouichi secretly went to see Miu in Shimane, it is expressed to the factar eye). Kouichi made contact with the human Makina boss Deus during the "operation to destroy the moon jamming facility".Although he lost his mind and body because of 'missing' as a result of hitting the compression / transfer field, he was inspired by the encouragement of Yajima in the beginning of the attack by the human Makina, and he fought on the plane with Alma Tsukuyomi. She seems to be interested in gardening, such as reading a book about Gardening and cares about the flowerbed in the back of the school building. The line barrel tries to protect Emi though since she is a factor, she refuses and becomes exhausted, boarding to the line barrel, and when she forces to maneuver, it is extremely exhausting.Therefore, long-term boarding is not possible.However, if she is in a crisis than Kouichi, Emi is in top priority, it is possible to call the line barrel. In the early days of being transferred with the line barrel, she was sleeping in the cockpit and had lost all of her previous memories.When she later came into contact with her father, she regained her memories of her father, amenouji, However, at that point. He was originally a resident of the same world as Hisako, and he knew that he had come to this world in order to prevent his ambition. When the final decisive battle has not been informed of the state of Kouichi, he had been crying in front of his monitor image to go disappear immediately after the decisive battle.

She claims to have a secret past with Linebarrel, she contacted a memeber from the JUDA’s office, she claims that JUDA owns the Linebarrel three years prior to the story, possibly during the strange metor that happened in 2016

Emi is a tall 15-year old Girl with black hair, dark green eyes and a Beige skin complexion, she has v-shaped frizzy bangs similar to Kouichi’s that are on the left side of her face.

At first, after she wears clothes, she wears a regular pink shirt with a big yellow jacket that reaches up to her neck.

When she is wearing her JUDA uniform she wears a black sailor fuku with a white collar and a white tie, she also has white lines embroidered in it with a black skirt and black stockings accompanied by another pair of short black long-socks with black loafers.

When she is Junior High, she wears the same uniform Kouichi Hayase wears with a white skirt and black stockings with black Spectator Shoes.

As Emi grew older she became 5 feet 7 inches, which is twice as tall she was at age 15.

Magazine of Emi being held by Kouichi

Emi dressed up in Lolita dresses

Kouichi by emi's side by Hisashi Hirai

Emi in the middle

Emi, next to Miu and Shizuna 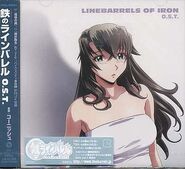 Emi in the cover for the Linebarrels of iron offical soundtrack

Emi seen as shocked
Add a photo to this gallery
Retrieved from "https://kurogane-no-linebarrel.fandom.com/wiki/Emi_Kizaki?oldid=679"
Community content is available under CC-BY-SA unless otherwise noted.